Okay, another in a great line of community-built hardware projects: The Mini-Thylacine, 4 port USB controller card for all Zorro II and Zorro III Amigas.

A few years ago, there was a commercial product called the Thylacine card. The design was eventually open-sourced for anyone who wanted to build it. One Amibay user started making production runs in batches of 20 at a time (Ginny Flick).

Eventually, this user started making a miniaturized design that had a single header to attach a standard usb header connector for 4 ports. This was the mini-Thylacine card shown here:

Here are the features:

– full SMD technology;
– dimensions: 130x69mm;
– integrated HUB with 4 ports;
– each port is short-protected and over-load protected;
– fully bug fixed, no a single correction on schematics or PCB;
– max transfer rate is about 380KByte/sec (depends of your CPU power);
– low current consumption (about 160mA) without any device connected to USB ports.

And the ordering thread is located –> here <–. I used the original thylacine that he built a few years ago, and the transfer speed was a bit slow, but it was fully working with the Poseidon USB stack. Ginny_Flick would email the driver after an order had been shipped.

Yet another cool project by clever Amiga users!

Okay, here’s yet another very cool, community driven project to fill in some hardware gaps that some Amigans have:

I remember first seeing this on various Amiga forums. Here’s the one on Amiga.org describing the progress of this project.

The specs on this card include 64MB of SDRAM, Native Zorro III speeds (later, configuration options for ZII mode was added), and an ethernet port rated at 10/100 speeds.

Here are a few pictures: 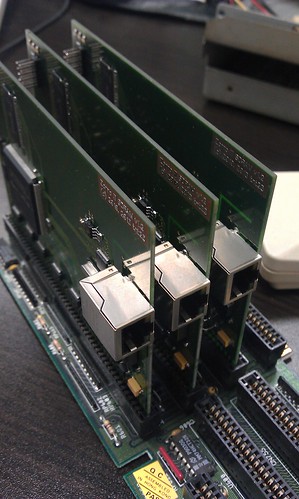 –> Here <– is a thread for someone custom building boards and selling them. Not sure if he has any more in stock though.

While I’d planned to do a 3 part blog series about the FPGA projects that users have or are making, I thought I’d go ahead and make this post about one amazing project I just learned about today:

The original threads:
Adapter on Amibay

More information was found about the A3640 adapter efforts (called informally the A3660). Apparently, some other changes are needed. Please see this forum thread to learn more.

Apparently, this will work for an Apollo 1240 as well.

While I don’t have any classic hardware anymore, I’d definitely check these threads. I believe the Amibay thread is also a place to declare interest in purchasing these adapters. I’d say that you’ll probably need some electronics experience to make them work as there are other changes needed.

The Amiga community has shown again and again that they don’t need a big hardware company like Commodore/Escom/etc to keep expanding their favorite computers!

So, Toni (WinUAE developer), and Frode (FS-UAE developer), have collaborated to get QEMU’s PowerPC core code working. Their first release with the PPC JIT code was 2900b15. While I did download and test it, I didn’t see a huge speed increase. There was a marginal increase with my laptop and definitely much closer to the real NextGen hardware, it still didn’t feel like we were there yet.

In the past few days, a new, beta 16 build had become available. To get the QEMU part working you, need a base qemu dll and several support files. Those can be found –> here <–. Unzip all the files into the same folder as the winuae.exe file.

The first speed up comes from using a harddrive file (hdf) connected to the virtual accelerator SCSI connection. I used the previous install of OS4.1 to an HDF file but it was on the IDE connection.

1) in the WinUAE setup, click "CD & Hard Drives"
2) On my previous setup, I had the HDF file on the IDE:0 controller, double click that line
3) This brings up the Hardfile Settings window, change the controller to "Accelerator Board SCSI"
(shown here).

The next speed up is in the internal settings to interface with the QEMU PPC portion. It doesn’t seem to be something the user can set. Toni increased the size of the QEMU PPC JIT cache, which he said made a big speeed difference. I can say that it does!

The SCSI change caused the OS to load faster under emulation than on either of my G3 AmigaOne computers.

I then ran NetSurf PPC to download Sysmon to run some benchmarks (I’ll make another post later about setting up internet connection).

I startup up SysMon and chose the Benchmark tab:

I ran Ragemem first, and then compared it to 4 other configurations:

Comparing to an Amiga4000 with the fastest CyberStormPPC accelerator board (273% faster):

I then ran the SDL benchmarks. In nearly every case, the Emulated environment was slower.

I then did two networking tests. The first was to use the Sysmon built-in network bandwidth test. On a very fast LAN environment, the emulated system achieve okay speeds (slow DSL speeds, but acceptable):

I then ran the same test on the host machine, very fast speeds:

I can’t help but wonder if this speed limitation is part of the ethernet.device driver…

Finally, I started up netspeedometer, and ran it while running AmiUpdate. During the MUI4 archive download, I got this screengrab, showing decent speeds. Again, no superspeed here, but acceptable. I also noticed browsing in NetSurf was very comfortable. Not quite as quick as using Chrome on the host laptop but again, okay. I plan to try Odyssey soon. Will update when that happens:

Finally, I started up Ranger to see what Mhz speed it determined. I am not sure if this is an actual frequency test or it interpolated it via some hardware ID found but it thought I was running a 604 at 233Mhz:

Again, I’m very grateful to Toni and Frode and anyone else involved in this. I plan to build a dedicated PowerPC AmigaOS4.1 system based around this emulator. Pictures when it is done!