Well, if there was a race to see which of the Amiga-flavors of OS would support both SMP (multiple processor cores) and 64bit architecture, along with the extra RAM afforded by 64bit addressing, it was won by AROS. Check out the video below:

Just saw this one on YouTube. Good to see that classic Amiga game development continues over 20 years after Commodore shut down:

Keep up the good work developers!

Enjoy this video by an Amiga user who wants to add a CD drive to their Amiga 1200:

The makers of Amikit, an amazing emulated pre-built environment, has released FlowerPot, a set of tools to automate setting up OS4.1FE in the latest and greatest version of WinUAE, without some of the limitations we ran into in 2015 and 2016 (like only being able to use PicassoIV emulation and not higher-RAM UAE graphics, pci bridgeboard support, etc).

It’s not free, but it’s not expensive either. I’m currently testing it and will have a review later.

Just an aside, someone made this retro wallpaper with Amigans in mind. Click for larger version: 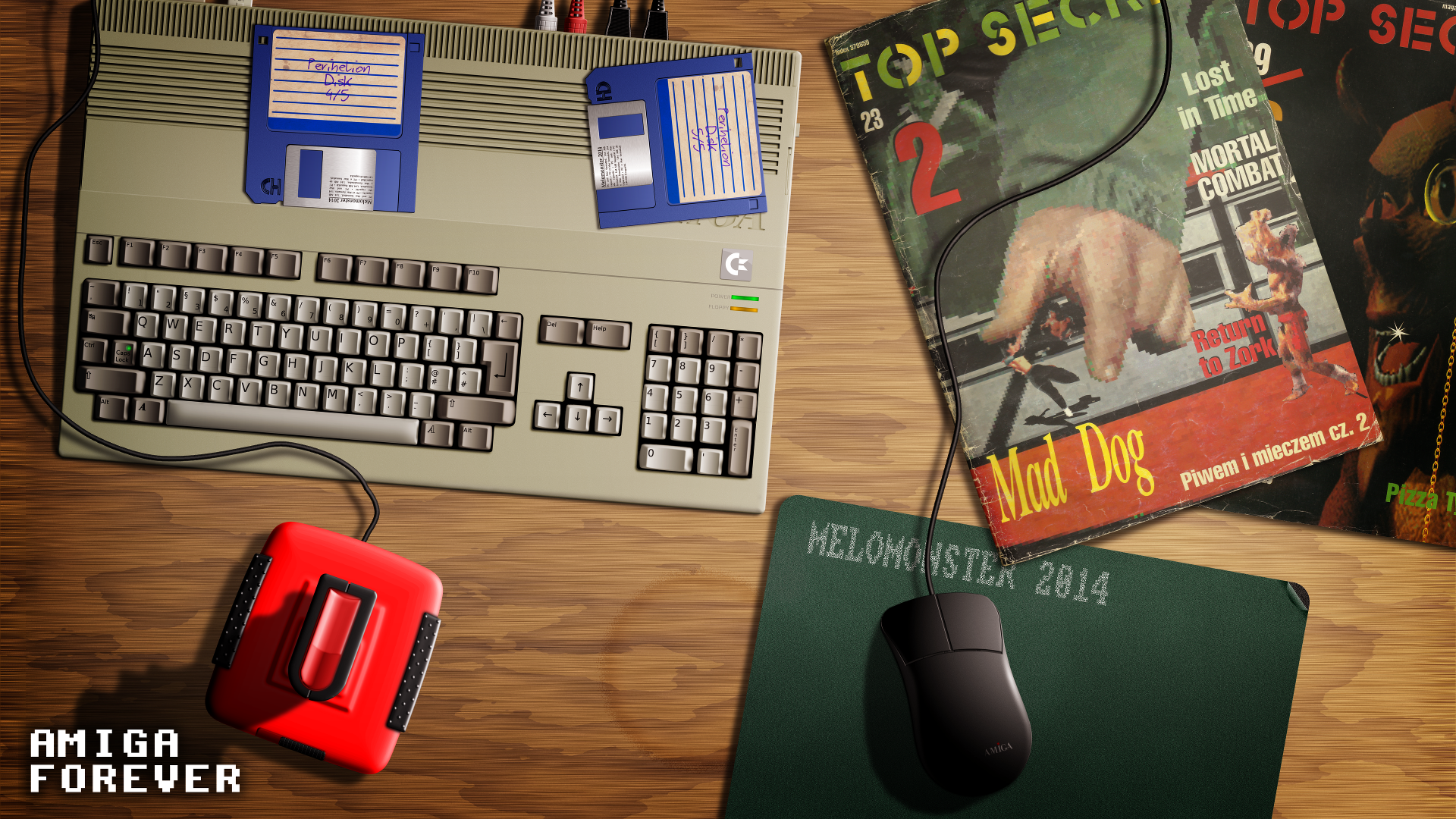 Here’s a good video about restoring an old Amiga 4000 with a VideoToaster.

Here’s a demo of the Hollywood development program running on the Amiga 500 with the Vampire 500 accelerator. This was from AmiWest 2016. Looks good!

Another enterprising Amiga hardware enthusiast has started delivering Plipbox’s with Commodore-style cases, in multiple colors and even branding them with Commodore Amiga-style numbering (A560 in this case). I’ve written about the very cool plipbox before (a decently speedy ethernet adapter for any Amiga that uses custom software and the parallel port). The designer made the hardware design available for anyone wanting to construct their own as well as the software to interface with it from the many Amiga TCP software stacks.

He appears to be pricing it very reasonably ($59 USD). This is probably the least expensive and easiest way to get any Amiga online.

So, anyone who has ever had an Amiga Accelerator from GVP (Great Valley Products), knows they are good hardware. But you’ve also probably noticed that the accelerators only take GVP-designed RAM SIMMs. I don’t know if this was to satisfy some timing issues or electrical issues or if they just wanted to keep close control over the RAM for profit reasons.

For those that have had this issue of being stuck with whatever RAM they got way back when they bought the Accelerator, you know how frustrating it can be when new browsers and OS upgrades need more RAM. The company itself appears to have long been out of business even though they still have a website running since the early 2000’s.

Whenever RAM from GVP shows up on Ebay or elsewhere, it usually commands top dollar.

Well, now there is an alternative. Some enterprising individual has designed some GVP-compatible RAM SIMMs and is selling them to the public. So far, these boards have been confirmed to work with the new RAM products:

These are 16MB 64-pin SIMMs though. If you have a GVP board that indicates only 1MB or 4MB only, then this won’t work for you. They are also actually AFFORDABLE: (29 euros per board).

The early batches seems to be sold out but if there is enough demand, then I don’t doubt another batch will become available. At the time I write this (Feb 2017), the provider is still taking orders and prepayments.

And be sure to read it CAREFULLY. It does appear to offer a warranty with the product.

So, I think I blogged about Stratagus a long time ago. It was an RTS engine that was ported to Amiga OS4 (and possibly 3.x as well). Using some addons, called Stargus, Amiga users could play Starcraft 1. It’s been around for a while but there is something called Wargus for Stratagus that makes Warcraft 2 available for Stratagus.

For the adventurous, you should download Stratagus first:
–> link link link <–