The MorphOS news keeps rolling lately. Version 3.15 is now ready for download and includes a lot of stability and security updates.

Also, v3.16 of the software dev kit is out and will need the 3.15 version to be installed to use.

Probably just a fan made teaser, but still…

While I’m still planning to finish my review of the latest MorphOS and Wayfarer in another post, I did stumble upon the news that the newest and most modern Amiga-related browser, Wayfarer, has now added support for streaming audio playback in the latest v1.9, and on top of that, a new v1.10 was just released:

When they first published this new browser, the author mentioned that he hadn’t planned to have multimedia playback. Maybe this is an indication that video is coming soon?

I’ve been away from blogging about Amiga-related news but I’ve been watching (well, mostly). I thought I’d come back by giving the latest MorphOS 3.14 a whirl, along with the latest, matching Chrysalis pack and the latest and greatest Qemu on my updated laptop.

Since I’ve sold all my PowerMacs, I’ll need something to run it on. The latest Qemu releases have been supporting Amiga OS4.1 FE for Sam460 (something I hope to do in the future, to test against WinUAE with the somewhat limited OS 4.1FE Classic) and MorphOS on PowerMac.

So, I headed off to Qemu-land

And I clicked the 64bit link and got the latest exe installer. While it was installing, I went to get the latest MorphOS ISO image at https://morphos-team.net/downloads

The, knowing I’d like a pre-made pack of software and settings, I grabbed the matching Chrysalis Pack 3.14 (the version number always matches the MorphOS release number) at https://www.morphos-storage.net/?id=1603238

On this page: http://zero.eik.bme.hu/~balaton/qemu/amiga/#morphos, I knew I needed a new openbios file, which is linked under the Known Problems section. It’s a zip file so I extracted that to the qemu installation folder, as well as the MorphOS and Chrysalic ISO images.

Finally, before starting it up, I needed to create a black disk image to act as the “harddrive” onto which I would install the system.

Opening the DOS command line program (cmd.exe) as administrator (start typing it into the windows search bar, when cmd.exe comes up, right click and select ‘run as administrator’)

The command to create the morphos disk image is simple. Once the command prompt is up, change to the qemu install folder and run this command (I’m going for a 4GB disk:

This should be very quick. Now, the command to start up qemu before the harddrive is setup or the system installed will be different from when you run it from the installed harddrive. Also note that I’m using the experimental ati-vga driver over the normal one and upping the standard memory to what I read was the max MorphOS could achieve on qemu:

This starts up and auto-boots from the morphos 3.14 install cd and starts the harddrive installer after it confirms preferred language and keymap:

I’m not going to run through the installer, step-by-step as others have done. I just picked the default settings and set the right time and timezone.

One thing I did change as I found out the hard way, was to set the system partition to 2GB for the Chrysalis Pack.

After a bit, the installation will finish. Then, I quit the qemu program and change the startup commands to no longer load the morphos cd, but to boot from the harddrive image as well as “insert” the Chrysalis CD:

When it reboots, the Chrysalis CD is the blue butterfly. Double clicking this opens the folder and the green and white icon is the installer.

Double clicking that will start the intsaller, and then clicking the “start installation” button will kick off the first script, which will open a terminal output window, as it downloads fonts for OWB (even though it will install an early version of the new wayfarer browser later).

After that one is done, click the Continue button on the main installer will open a 2nd terminal output window. This will take a LONG time as they unpack over 800MB of compressed data. In the end, it will take nearly 1.5GB (hence the need to have more than the default 1GB System partition when using a 4GB disk).

After reboot, there are some differences right off. First, and most obvious, there is a new launch bar at the bottom of the screen:

And right clicking on the desktop will reveal many new menu items at the top:

These have many/most of the shortcuts to the newly installed programs there for easy access.

Finally, in this blog post part (there will be at least a part 2 with more in-depth info on the other things found in Chrysalis and MorphOS), I wanted to get the headstart on Wayfarer. As with OWB before it, the first time it is run, it takes a LONG time to install all the fonts needed. Subsequent starts will go much faster.

Thanks for looking! I’ll do a part 2 soon.

Computer viruses aren’t things I would normally think about in the Amiga world, where the userbase isn’t nearly as large as Windows or Mac, since a virus is written by someone or a team.  However, viruses are still around.

I’m not sure which anti-virus software is the best or most updated but there is a team that is dedicated to the detection of Amiga viruses that are still on the job a quarter century after Commodore shut down.  Just yesterday a virus was uploaded to Aminet and detected within hours by that team. See their webpage –> here<–.

Yesterday, on April 30, 2020, something called the Jackal Trojan was detected, and just 19 days earlier, the Fuzz virus was caught.  Even though it is sad that this still occurs in Amiga-land, I’m glad there is a team warning about them and on the lookout.  Good job guys!

I recently have received a real, genuine Amithlon CD and plan to make a machine or two for myself using it.  While I wait for parts to arrive, I stumbled onto a video link about someone noticing that the latest AmiSSL doesn’t work on Amithlon due to a problem with the libraries.

Amithlon emulates an 040 but to get AmiSSL working, the 060 version of its library must be used.  To get Amithlon to use this one, the user had to run Make060 from Aminet in the user startup.

A video is here:

I just happened to see this recently on Amazon.  It’s a keyboard wedge-shaped computer case for the Raspberry PI.  It’s funny to see how design trends come around again.  I may get one as it is only $49USD. I need a case for my new PI4 anyway.  Maybe paint it white and put some Amiga badges on it and Ramiga or Amiberry on the PI. 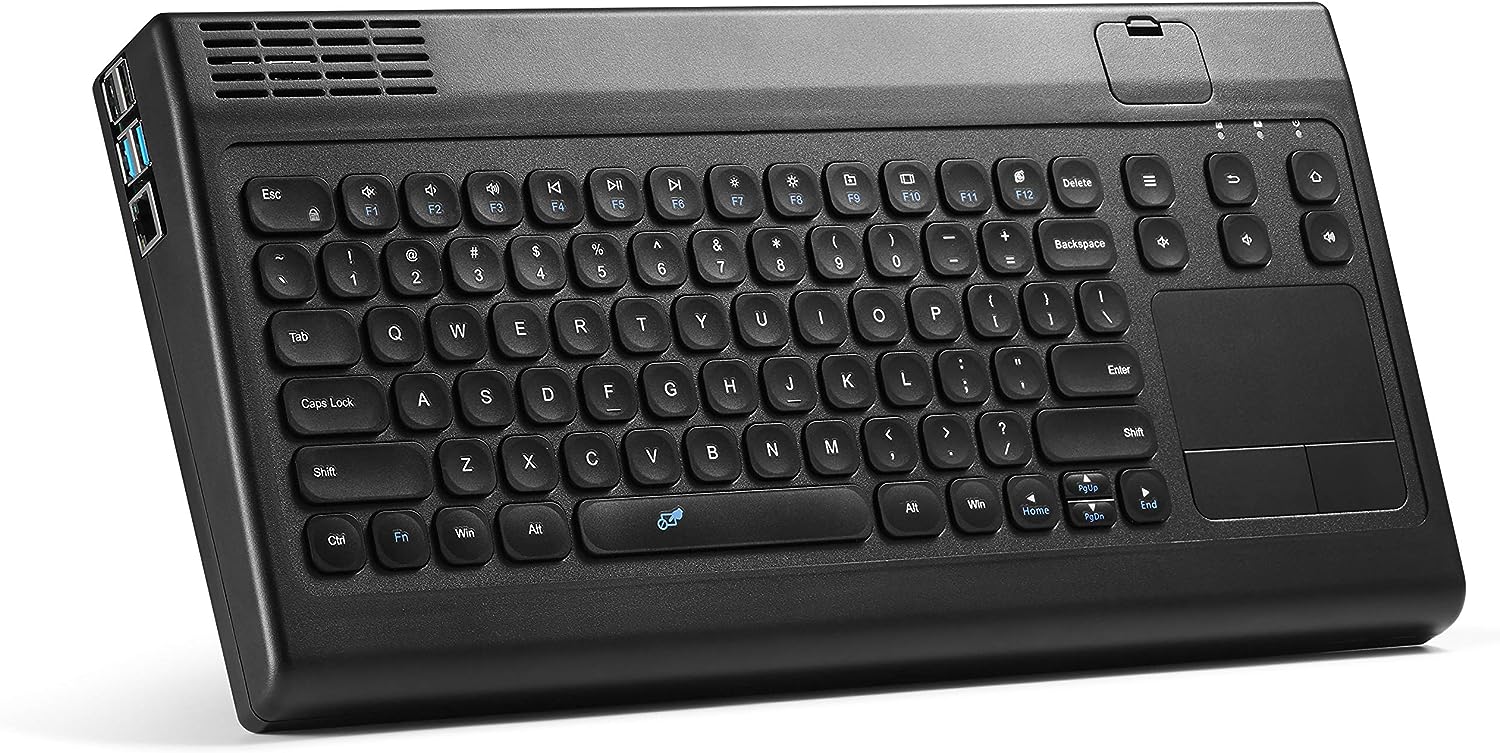 My personal favorite distro of AROS is Icaros Desktop, mostly because it was first, and updated with many features and has been consistently stable and came in a virtual machine format for easy testing.

Paolo Besser, creator of this distro has just annouced Easter-weekend preview of 2.3.0, but he’s limiting it to patreon supporters or dedicated beta testers. The announcement list here specifies why.  Apparently, it has to do with his pledge to no longer release buggy betas to the public.  I think he’s done a lot of work for the AROS / AmigaNG community so I applaud the move.

I formerly posted info about a beta release of PiMiga for RPi 4 and it was taken down shortly thereafter.  I don’t know if it was due to it being replaced for new features or the name was causing problems (it was called Corona edition).  Now, the newly renamed and re-released Lockdown Edition, has been released and there are downloads for both the RPi 3 and 4, not just the 4.

Due to how fast the other one disappeared, grab it now. Here’s the link and the password to unlock the file as of 4/6/2020 (can’t say any of this will work after today):

NOTE: There are 10 file links when there, the first 5 are for RPi3 and the 2nd 5 are for RPi4.  You don’t need to download them all. Becare full, these are HUGE files.