The MorphOS team has a more active release schedule than the Hyperion AmigaOS team.

I think I’m most interested in their support for Airport Extreme wifi cards built into many powerpc macs.

Okay, so this isn’t going to become a news site but occasionally, when many things happen at once that are interesting, I’ll comment. This is classic-side news: 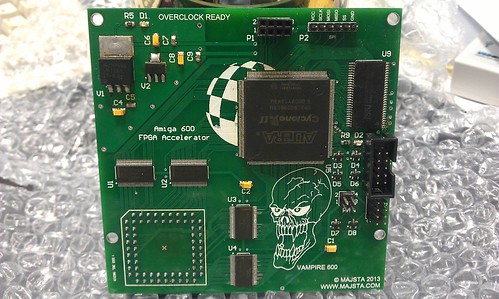 This post is just a collection of various thoughts I’ve been having about classic Amigas. Instead of making several tiny posts, I thought I’d put them all into one.

What is it about the Classic Amiga UI? As far back as the late 90’s, I just can’t stop staring at how the UI looks? I know that others UI’s would be considered prettier and more useful than the Amiga UI, but there’s just something that I can’t quite pinpoint. Here are a few thumbnails of some recent ones that mesmerize me (click for larger ones):

From a Draco system

It’s amazing that computers made nearly 20 years ago continue to get hardware products. Let’s take a look at just a few:

The Amiga Prisma soundcard for both Zorro slot and clockport enabled Amigas. This is a very nice soundcard that can be used in large zorro slot amigas as well as an Amiga 1200 (or other models that have expansions that include a clockport connector).

Then there is a plug-in MP3 player so that your CPU doesn’t have to do all the work, it has its own player software and is cheap, and works on nearly all Amigas.

A long-time Amiga hardware developer, Elbox, recently expanded their product line again, this time to add PCI adapter boards for the Amiga 3000’s. These, plus their other PCI Mediator boards, allow the use of cheap PCI expansions.

There is a new, zorro slot, mini USB controller board that is fairly inexpensive for big box amigas called the MiniThylacine board. It’s ordered on a piece-by-piece basis and the assembler takes orders constantly.

And then there’s a company called Individual Computers that makes a whole line of products for Amigas. From accelerators to flickerfixers, they continually prove their willingness to support the Amiga. Their most recent part, the ACA500, allows the use of Amiga 1200 accelerators in an Amiga 500. Someone even got Amiga OS4.0 running on the BlizzardPPC board on the ACA500.

Wow, it’s amazing the dedication there is in the Amiga community.

Okay, so it is with great sadness that I had to abandon my Amiga 1200 Classic Tower project. Funds and time didn’t allow me to work on everything I needed to, so something had to go. In fact more than one something.

My first step was to sell the Angled PCMCIA adapter. The motherboard I had seemed to have a damaged PCMCIA port so I couldn’t use it anyway. Next, my main tower, which was a Micronik Infinitive, along with the A1200 rev2B board, as well as the Micronik 6860 ZorroII busboard, powersupply and adapters went into it as well.

I also sold the GVP accelerator and all 36MB (2x16MB and 1x4MB) GVP custom SIMMs were sold as well. Still no shortage of collectors out there. I also am selling a spare parts tower too.

I’ve decided to focus on two new projects, which I’ll blog more about soon. One is based on NextGen technology.

I have 2 Eyetech AmigaOne boards, one is XE and the other is Micro. I’m also prepping to sell the A1XE machine (motherboard and case and expansion cards), and just focus on the Micro for now.

The new projects will be fun, I have no doubt! The funds from selling the tower project will help bring this to fruition.